Writers tend to have writer friends.

There are innumerable reasons for this, not the least of which is that we share a specific skill set: Understanding Writer Crazy. When writers connect strictly on a craft level, we speak the same language. After we've been in the publishing business for a while, that language takes on nuances and dialects that make communication trickier.

Ah, the good old days of the unpublished side of publishing. Long nights filled with the possibility of creating a story that would be beloved by all, the joy of playing with a world that belonged completely to me, and all that WANT. I wanted everything. To finish, to get an agent, to sell.  Desire is a strong motivator.


I've discovered it's only outweighed by fear.


After five years in the business of publishing, I wrangle fear every day. It's not a thing we really talk about, or maybe it's a thing we don't identify, but I am a writer who has writer friends, so I know it's A Thing.

I've had quite a few friends who've sold recently. They've signed their deals and then become disoriented when everything isn't instantly kittens and cupcakes. I liken these friendships to parenthood - you see the struggles coming, you want to take them on FOR the newbie because you know how to handle them, you give solid advice that you've learned through experiences - but eventually you sit back and watch your loved ones learn to crawl, to cruise, to walk. And pray they don't break anything or end up with a limp. We go from owning our stories to owning our experiences.


Publishing is serious business. It's almost like MATH, because it involves problems and projections and expectations and numbers. You have to deal with embezzlement (piracy), promotions (awards or best seller lists), sales (freaking Bookscan), and teamwork.


Hold up. Teamwork? Isn't writing a solitary profession done by introverts who wear yoga pants and drink coffee and have friends who live in their computers?


Well, yeah, maybe writing is like that. But publishing isn't. That's where fear butts in


There are people you need to please. Agents, editors, reviewers, readers. By agreeing to put your words between two covers, you make a promise (or you should) that you'll deliver the very best story you can.

​Y​
ou risk disappointing others if you fail. Th
​at risk is also​
a strong motivator.


​So you try, as hard as you can, because writing stories is what you love. Pleasing even one person is worth the fear. ​Remembering how you were so certain the grass on this side was greener, possibly velvet, and fertilized by unicorns, helps you remember that the other side wasn't easy either.


So you make your stories, you let them go, and then you lean on your friends.

Myra McEntire is June's second Affiliate Blogger. To find out more about our guest author positions here at the League, click here. 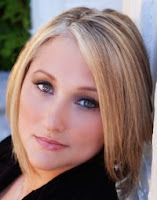 Myra McEntire knows the words to every R&B hit of the last decade, but since she lives in Nashville, the country music capital of America, her lyrical talents go sadly unappreciated. She’s chosen, instead, to channel her “mad word skills” into creating stories.

She’s an avid Doctor Who fan and will argue passionately about which incarnation is the best.

For seventeen-year-old Emerson Cole, life is about seeing what isn't there: swooning Southern Belles; soldiers long forgotten; a haunting jazz trio that vanishes in an instant. Plagued by phantoms since her parents' death, she just wants the apparitions to stop so she can be normal. She's tried everything, but the visions keep coming back.

So when her well-meaning brother brings in a consultant from a secretive organization called the Hourglass, Emerson's willing to try one last cure. But meeting Michael Weaver may not only change her future, it may also change her past.

Who is this dark, mysterious, sympathetic guy, barely older than Emerson herself, who seems to believe every crazy word she says? Why does an electric charge seem to run through the room whenever he's around? And why is he so insistent that he needs her help to prevent a death that never should've happened?